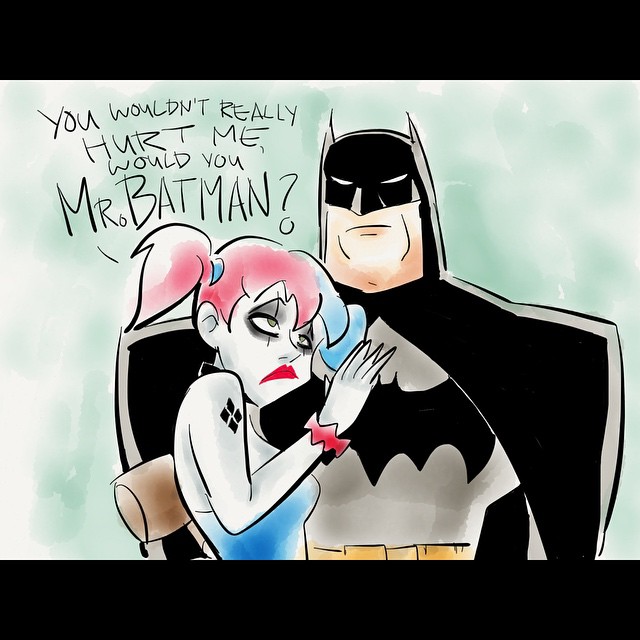 The dreams of DC fans like me are slowly but surely coming true. Yesterday, David Ayer, the director of 2016’s Suicide Squad, unveiled for the first time the film’s cast in their full costume. The Suicide Squad or “Task Force X” is a group of imprisoned super-villains sent by the government on extremely dangerous secret missions (hence “suicide”) to reduce their prison sentences. There were a couple of notable characters in the promo photo, but the one who really stood out was Harley Quinn played by the stunner Margot Robbie.

As a lot of people know, Harley’s the sidekick and, in some stories, girlfriend of the Joker. The character actually made its debut in the ’90s Batman: The Animated Series, and was so popular with fans that DC eventually decided to include her in comicbook canon. I really dig Harley Quinn myself, so to celebrate her live-action movie debut, I drew 3 digital illustrations of the character on my iPad, beginning with the one above.

I took some inspiration from the character designs of Bruce Timm, the legendary animator, but ultimately, I really wanted to create my own cartoon Harley. I took the blue and red hair from her recent comic appearances and added a few touches of my own. This applies to the Joker and Batman characters in this series of drawings, too; I wanted them to look familiar but still my own versions.

I really hope I captured Harley’s crazy, funny, flirty character in these 3 simple images. I’ve been drawing some pretty serious stuff for a while now, so drawing in this cartoon style is admittedly a fun, welcome break. I’m actually thinking about drawing cartoon versions of Killer Croc, Deadshot, Captain Boomerang, and Katana. But those are all in the future–hope you enjoy these ones! 🙂