As far as I’m concerned, Jurassic Park (1993), is one of the best films ever made regardless of genre. It’s such a long time ago but I can still vividly remember the first time I saw a dinosaur on screen; CGI was still fresh to my young eyes back then, and I could have sworn Hollywood somehow got its hands on a live Brachiosaurus. Even more memorable was the first time I witnessed a Tyrannosaurus rex, its big eyes surveying the people terrified out of their wits in their little Jeeps. I think I almost pissed myself when it let out its thundering roar that shook the cinema.

Nowadays, CGI dinosaurs are so common that it’s hard to relive that cinematic magic even with the vastly improved visual effects of the Jurassic World movies. Nevertheless, I’m still as big of a dino nut as ever before, just because I’m endlessly fascinated by the thought of massive reptilian and bird-like animals roaming the earth millions of years ago. The fact that they’re extinct and that I’ll probably never be able to see one in my lifetime (non-avian dinosaurs), makes dinosaurs precious to me, and they’ll most likely be a constant fixation of my imagination for many years to come.

I recently got hooked on dinosaurs again, and as is customary with this nerd, I had to produce a series of illustrations to scratch that particular nerd itch. 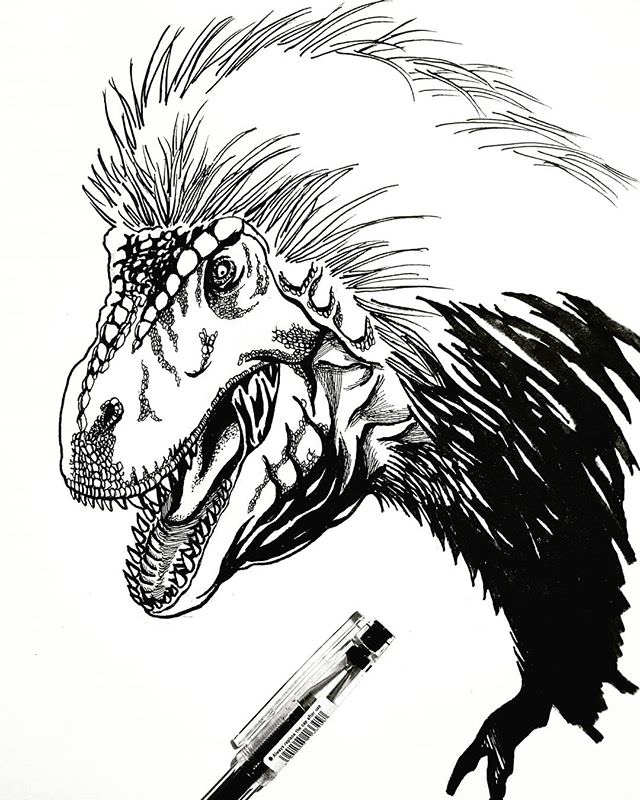 Except drawing dinosaurs is different than drawing Batman or Ninja Turtles because, if you seriously want to produce good dino drawings, you need to do what paleo artists do–that is, research a ton of scientific material. Paleo artists are these amazing professionals who create scientifically informed artwork to bring extinct fauna and flora to life. Nobody would have any concept of how dinosaurs, sabre-toothed tigers, mammoths, and even early hominids looked like if not for these hardworking, talented people.

Needless to say, it’s not easy to be one. Paleo artists spend years studying and practicing their craft to produce artwork that will satisfy both paleontologists and kids reading an illustrated book of dinosaurs. That, however, hasn’t stopped me from trying my hand at it, and so I managed to draw my first feathered T-rex ink drawing above. 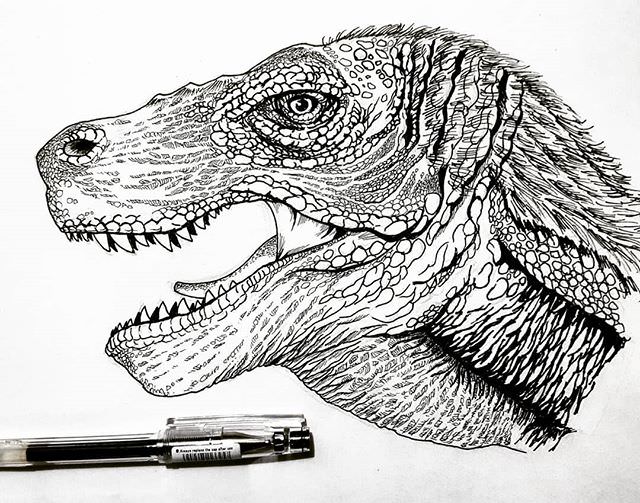 It wasn’t good enough. I went overboard with the feathers because I was thinking about fighting cocks with their neck feathers standing on end whenever they’re about to fight other roosters. Science, of course, tells us that theropods (two-legged dinosaurs), including T rex, were most likely feathered because dinos are basically birds. I tried to depict this with my drawing but it just looked wrong.

I revised it with my drawing above, toning down the feathers on the neck region, and this time referencing several reptiles and birds, including snakes, turtles, komodo dragons, vultures, eagles, and turkeys. The level of detail improved but in my enthusiasm to incorporate every reference into my model, I forgot to give the head volume and shape, so that in the end, it ended up looking like a flat, albeit detailed, drawing of a huge scaly lizard. 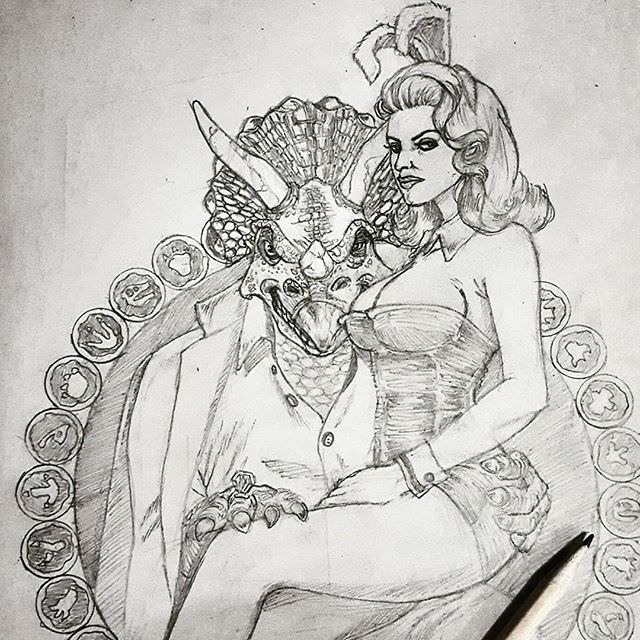 I’m a firm believer that if something’s not working, you should drop it temporarily and do something else instead to refresh your perspective. After two “failed” attempts at accurate paleo art, I went back to my strengths and started the anthropomorphic sketch of a Triceratops mob boss above. I think I’m fairly good at drawing people, so I was more comfortable creating this piece. My concept was that in an alternate universe, dinosaurs had evolved alongside people, and they ended up enslaving them, which is why there’s a scantily clad courtesan sitting on this ceratopsian crime boss’ lap. 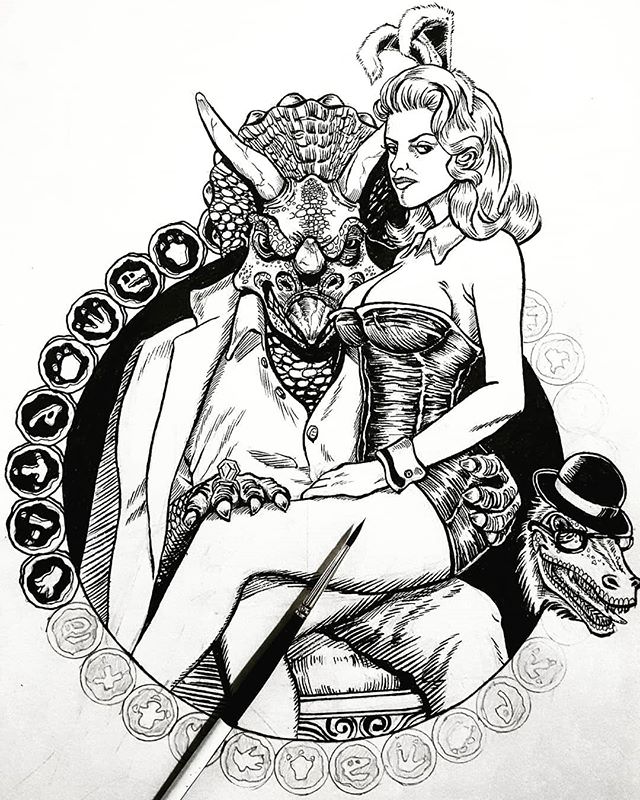 The circular symbols made of bone around the figures are actually house sigils. I imagine this society of dinosaurs would have elites of different clades belonging to different houses, so that there’s a tyrannosaur house, a sauropod house (long-necked dinos), another one for dromaeosaurs (raptors, including the famous Velociraptor), for ceratopsians, etc. Humans would be tradeable commodities serving these dinosaurian beings but they would be conspiring to launch a revolution (which is why the woman here in this drawing actually has that mysterious, impenetrable expression on her face). There was some space that needed to be filled in the lower right portion of the drawing, which I concealed by adding another dinosaur–a Troodon, a supposedly smart raptor. I imagine this little Troodon is actually the Triceratops mafia boss’ accountant and he’s responsible for coming up with ways to launder his boss’ dirty money. 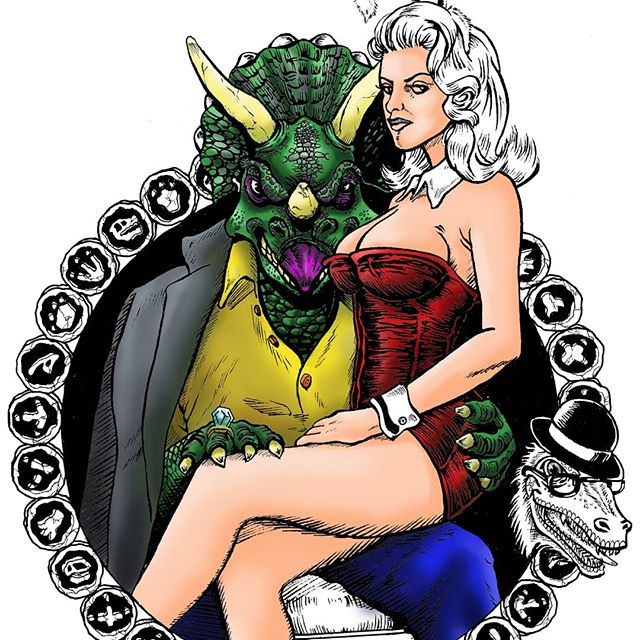 After finishing the inks, I ran into the same problem I encountered while creating my previous TMNT illustrations. I realized that colors are just an essential part of paleo art or almost any kind of artwork that shows dinosaurs because without colors, it would be hard to imagine these creatures and appreciate their unique characteristics. It was during this moment of hopelessness that my amazing girlfriend came to the rescue–giving me a Wacom Intuos as her birthday gift! It was exactly what I needed to bring my black and white ink drawings to life, and I quickly took it for a spin by digitally painting colors on my Triceratops mob boss piece.

The big problem was that there was a big difference between colors as they appear on my laptop and as they appear on cell phone screens. On my laptop, the colors were dull (which is what I liked, because I don’t want colors to drown my line art), but on cell phone screens, they looked too bright. This was solved by adding a low opacity layer of an old paper texture, which softened the brightness and contrast of the colors. I ended up liking the final product, and I’m looking forward to creating more drawings depicting this world. I’m also planning to get back to more serious paleo art, and hopefully next time, I’ll be able to produce a much better T rex.